Coding in the Clink - Another Success!

Today I again had the privilege of attending a Coding in the Clink , this time number 6. This was my third visit to Marion Correctional Institute. (Read about my first visit and my second visit.) The last time I went was June 2011. Since then, the Java Guys have definitely continued to improve, in TDD, pairing, and Java. And as before, the guys were curious, hard working, and fun to be around.
As always, Dan Wiebe did a great facilitation job, and this time added new twists. He had us break from CodeRetreat tradition in a couple of significant ways (besides the fact that prison lunch never qualifies as "something good, catered"):
In round 2, when I sat down at someone else's code for the first time, it took most of that round just for me and my pair to make sense out of what was there. (Most pairs experienced this too.) I found that each subsequent code base I visited was easier to understand (and most other devs found this too). It was cool to sit down to each subsequent code base and find something better than I had previously sat down to.

For our final round, everyone agreed to go back to the workstation where we started. I'm not sure there was any consensus around that experience. For me, I was sad to find there weren't many more tests 5 hours later than when my pair and I first left it. (Which seems odd, given the experience of improving codebases we had up until the last round. Maybe I was having some bias when looking at "what they did to my code"?)
I'll close with the logo for today's event, as created by one of the inmates, Mark Roberts: 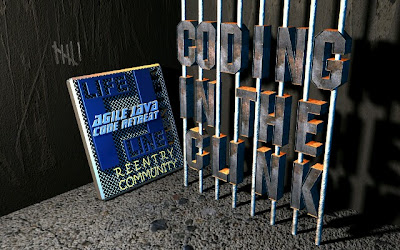 What is "The Forge, By Pillar"?

If you weren't at Agile and Beyond 2012, you may have missed the announcement by Pillar Technology (my employer) that we will be leasing a large space in Ann Arbor's Tech Brewery, a 1850's era building that started life as a brewery and is now a tech startup community with over 30 member companies. The space, and the activities there will be known as "The Forge, By Pillar".

My understanding of this new sub-brand its that it will a place where Pillar can:


I've found that people often want to start writing software differently but feel held back by various forms of inertia in their company. I imagine The Forge being a place where people can come, individually or as part of a company team, for an afternoon visit, a training course or workshop, or for weeks of on-site coaching and development.

Please join us for an open house on May 17th (note the updated date:) Thursday, June 21from 6-9 pm at Tech Brewery and see for yourself what The Forge is about! (map)
Posted by Jeff Hoover at 10:57 AM No comments:

There's been a lot of attention on Twitter to an article by Jon Evans at TechCrunch that takes a fairly broad attack on the agile practice of pair programming, only to advise readers to use their best judgement about it. I find the piece to be a sensationalist attack on a practice that the author doesn't seem to understand. He cites the ineffectiveness* of "brainstorming", which pairing is nothing like; and the dangers of allowing people to hide and let others do the work, which good pairing actually mitigates. Even if you grant his, in my estimation, weakly-supported hypothesis that it harms superstars, it completely misses the accelerated learning and distribution of knowledge that pairing affords agile developers and newbies. The article also misses the natural instinct that we developers have to work on what we find fun and interesting, even if it's not trying to solve the business problem at hand - how many times have you seen a cowboy rewrite working code because s/he didn't like it or because  it was a prime candidate for a flashy new technology? Waste like that doesn't happen in good pairs. Neither does finding yourself at the end of a couple of hours having achieved little besides some web surfing, a few personal calls, and having reduced the size of your inbox? Or haven't we all seen great, creative solo work, that isn't what the business needs?

Evans doesn't acknowledge that pairing is a skill that takes practice to get good at, and for some developers getting good at it requires some people to step out of their comfort zones. Rather than his arguments against pairing, I'd like to see an article discussing personal challenges that pairing poses for some developers and the courage that it will take for them to become good pairers, if they want to avail themselves of the benefits of pairing.


* This claim may not even withstand scrutiny: http://bobsutton.typepad.com/my_weblog/2012/01/why-the-new-yorkers-claim-that-brainstorming-doesnt-work-is-an-overstatement-and-possibly-wrong.html
Posted by Jeff Hoover at 7:41 AM No comments:

I have a team that's just starting agile. During Sprint 0, we decided on a Definition-of-Done, but the team also wanted a way to make the criteria for moving a story card from one column on the wall to another big and visible. Being new, they thought it would help them to see, as they move a card from one column to the next, what had better be complete at this stage. If they had missed something, they have a chance to catch up before they actually move the card. We came up with yellow boxes that sit on the physical boundaries between columns on our card wall (see right). I'm calling them State Change Criteria (since there's already been a CCC since early XP days). The team left room to hand-write new criteria as their understanding grows and their process improves.

We came up with two more big visibles (not shown) that address the flow of "defects". One says: "In-sprint defects are moved back into Sprint Backlog." This is to remind the team that we don't track problems with in-play cards, we just fix and finish them within the sprint. The other says: "Escaped defects are written as new user stories and moved back into the Release Backlog." This is to remind the team that the Product Owner may choose to prioritize new functionality above fixing the defect.
Posted by Jeff Hoover at 9:06 AM 2 comments: